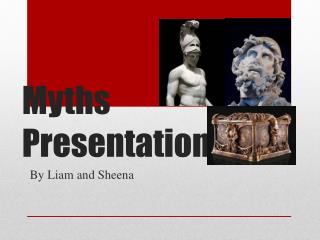 Myths Presentation. By Liam and Sheena . In Greek mythology Ares was the God of War, Destruction, and Chaos His parents were Zeus and Hera Ares was one of the less popular Gods in Greek mythology due to his nature and personality, no city wanted to adopt him as their patron God. 20 Myths About presentation training course: Busted - Just adhere to the easy steps below monthly or even more, and

Matching Myths a presentation by Mrs. Palacios - . why the leaves fall demeter and persephone. the lakota tribe. part of

Myths and Urban Myths - . myths. myths are not just stories people believed long ago. people throughout time have

MYTHS - . native america . what i want to know. what i’ve learned. what i know. do now. on a post it note, write down

Myths ..... - Myths . 'health and safety' wants to wrap everyone in cotton wool and take all the risk – and fun – out

Myths - . stories about gods, goddesses, and spirits try to explain how things in the world were created happened

Myths - . ms. mitchell freshman literature andover high school. “ and there were so many fewer questions when stars

Myths - . stories whose truth seems self-evident because they do such a good job at integrating personal experiences with

Myths - . isabella beaton john anderson meagan lane. “song of the timeless myths” – from the book of

Myths - . 90% small startup fall into a financial crises and fail in the first 3

Myths… - . cupid &amp; psyche. once upon a time there was a king with three daughters. they were all beautiful,

Myths - . a myth is a story with a purpose. it tries to make sense of the world.   myths also try to explain the

Myths - . olympians greek gods. what is a myth ?. people had questions no answers since there was no science created

Myths - . myths are symbolic tales of the distant past that concern the origin and nature of the universe, may be

Myths - . mythology. the study of myths. myth. is a traditional story usually of unknown authorship not supposed to

MYTHS - . theseus and the

Myths - . what is it?. what is a myths?. myths are made up stories that try to explain how our world works and how we