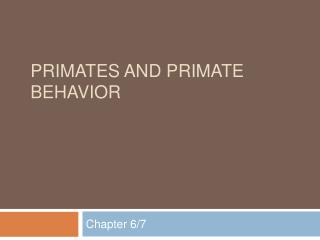 Primates and Primate behavior. Chapter 6/7. Predisposition. The capacity or inclination to do something. An organism’s capacity for behavioral or anatomical modification is related to the presence of preexisting traits. Chimp bites woman’s face off!…. Jane Goodall’s take on the situation Primate Behavior - . do primates really have a culture?. observation note-taking. in each row, you will take notes on

Primates - . jordyn fode. primates are monkeys. they all are mammals . they are partly covered with fur. they all have

Primates - Are an order of mammals which includes lemurs, monkeys, apes, and humans where do we separate?. primates.

Primates - . what characteristics do primates have over other animals and specifically, other mammals. primates as

Primates A. Primate : group of mammals that include lemurs, monkeys, apes, and humans - . 1. arboreal : live in trees 2.

Primates - The evolution of primates. 3. primates. humans, monkeys, and apes belong to the group of mammals known as the

Primates - . primates: characteristics. in general, characters used to define primates are not unique to the group, and