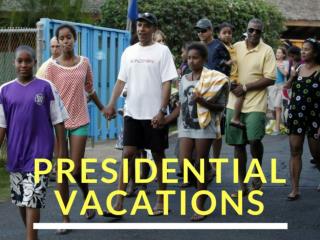 President Barack Obama had Hawaii and Martha's Vineyard while George W. Bush had Crawford, Texas, as vacation destinations while in office. The year America chose Trump - A look back at the u.s. presidential election campaign of

The Republican debates - Highlights from the fifth official republican presidential

Celebrity stumpers - Notable names show their support to the 2016 presidential

HOW TO CLOSE - . teresa harding us founding presidential diamond. 1. assuming the sale. each person starts with 5