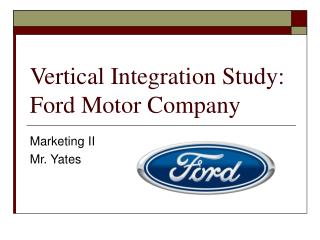 Ford Motor Company - Maker of cars, trucks, suvs and other

Strategic Sourcing - . dr. ron lembke operations management. old view of the world. one company does all processing, from

Henry Ford and the Assembly Line - . how did the two combine to change the world?. who was henry ford?. founder of the

Big Business and Labor Ch 6-3 - . andrew carnegie. carnegie steel company-attempted to control as much of the steel

IN ANY MANAGEMENT MODEL, VERTICAL AND HORIZONTAL INTEGRATION: -IS A VITAL ELEMENT FOR SUCCESS - Horizontal and vertical