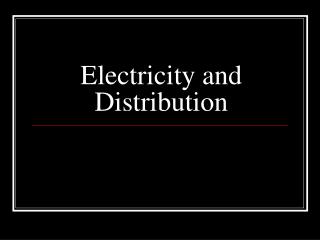 Electricity and Distribution. Basic Electricity. Three elements to an electrical circuit 1. A source of electricity 2. A load using the electricity 3. A circuit : provides a path between the two Two types of electricty direct current or DC and alternating current or AC

Chapter 21 - . electric fields. the origin of electricity. the electrical nature of matter is inherent in the atoms of

Experimental Study on the Efficiency of Harvesting Power from Rain Gutter Downspouts - Goal. determine how much energy

Hazards of Electricity in Construction - . overview of the hazards of electricity and how to avoid them. december, 2010.

SCHAEDLER YESCO DISTRIBUTION - . vision: to be recognized as a leader in distribution services and solutions. our

3.05 Channels of Distribution - . textbook. review pages 450 - 451. what is distribution?. the moving or transferring of

Static Electricity - . what is static electricity ?. a stationary electrical charge that is built up on the surface of a

3.07 Channels of Distribution - . textbook. review pages 450 - 451. what is distribution?. the moving or transferring of