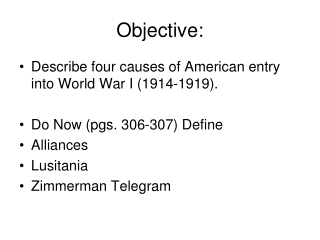 Overview of Objective-C - . cse 391 fall 2012 tony scarlatos. what is objective-c?. objective-c is an object-oriented

Discussion Objective 1 - . (a)  clarify the terms entrepreneurship and entrepreneur;. definitions for objective

Objective - . the objective of the campaign was to generate leads by creating a strong call to action through innovative

Are Moral Values and Duties Objective? - . an examination on whether morality is purely subjective or objective.

Writing an Modified Objective Summary - . adapted by mrs. shoulders. what is an objective summary?. objective -

TAKS Objective 5 - . earth and space systems part ii. taks overview. 12 questions out of 60. you need at least 9 right to