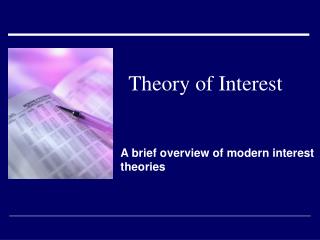 Theory of Interest. A brief overview of modern interest theories. Knut Wicksell (1851-1926). Born in Stockholm , Sweden, 1851 Son of a successful businessman and real estate broker Orphan at the age of 15 Mathematics and Physics 1887: Economics 1898: Interest and Prices The Austrian Theory of Capital and Interest - . peter lewin: university of texas at dallas plewin@utdallas.edu my web

Identity and interest: Rational Actor Theory - Balancing the categories of &quot;moderation&quot; and

Titles of Interest - 2. ashgate publishing is one of the world's leading publishers of academic research in the social

Conflict of Interest - . boss watching. as you perform your day-to-day duties, your co-workers and staff look to you for

Statement Of Interest - Statementofinterest.com. if you need to get the best statement of interest you should only visit