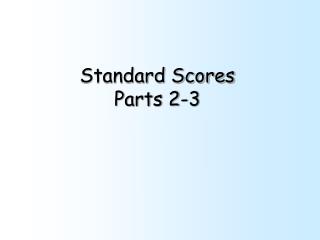 Standard Scores Parts 2-3. Standard Scores. Allows us to compare scores from two tests by converting these scores into a standard scale Once the scores are measured in the same units it is possible to compare the results. Z Scores. Z-SCORES (STANDARD SCORES) - . we can use the sd (s) to classify people on any measured variable. why might you ever use

What are Standard Scores? - . standard scores provide a means to combine multiple scores with unlike scales?. standard

Standard Scores &amp; Correlation - . review. a frequency curve either normal or otherwise is simply a line graph of

Standard Deviation Z Scores - . learning objectives. by the end of this lecture, you should be able to: describe the

Standard Deviation &amp; Z-Scores - . let’s start with an example. i divided the class into 2 teams, a and b.

Normal Distributions and Standard Scores - History of the normal curve. the scores of many variables are normally

Mod 2 Parts 2 and 3 Quiz - . ap psychology. 1. which of the following is not trues about case studies?. they allow the

Standard Scores and The Normal Curve - . z-score. just like percentiles have a known basis of comparison (range 0 to 100

Measures of Dispersion and Standard Scores - . deviation review. deviation is the difference from a standard or reference

Standard 8-2 AND 8-3 - . the student will demonstrate an understanding of the causes of the american revolution and the

Standard 3 - . candidates who complete the program are educational leaders who have the knowledge and ability to promote