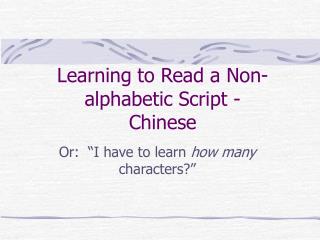 Learning to Read a Non-alphabetic Script - Chinese. Or: “I have to learn how many characters?”. Basics of Chinese Characters. Represent a single syllable in the spoken language Usually a single morpheme, except for some foreign loan words Give some but not reliable phonetic information Learning to Read a Non-alphabetic Script - Chinese - Or: “i have to learn how many characters?” basics of chinese

Learning to Read: - . how to support your child with reading at home. ben and bob. modelled reading. demo by duane.

Learning to Read - Presented by: gail hannas parents and reading reading to learn www.flreads.org 10 ways to help your

Learning To Read - . unlocking the secrets of print!. i am in the slow group in reading. my little brother was a wise man

Learning To Read - . how do we teach children to read?. the power of reading. creating a love of reading in children

Learning to Read - . how do children learn to read? how can we as parents support the process?. attitudes to reading.

Learning to Read - . how did you learn to read and write? what are the differences between learning speech and learning

Learning to Read - . information for parents 13 th march 2014. why is reading so important?. it is the greatest gift we

Learning How to Read a Map - . holler for mastro llc http://www.hollerformastro.com created by: kasha mastrodomenico

LEARNING TO READ USING - . fun &amp; games. my goal: my goal is to show students that although reading is an