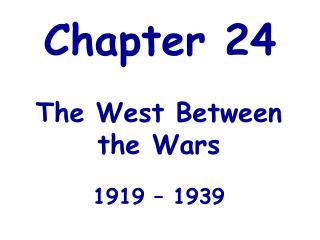 Chapter 24. The West Between the Wars 1919 – 1939. Key Events. Europe faced severe economic problems after World War I, including inflation and the Great Depression Dictatorial regimes began to spread in Italy, Germany, and across eastern Europe