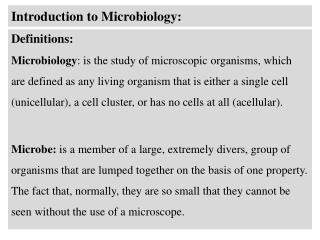 Introduction to Microbiology:. Definitions: Microbiology : is the study of microscopic organisms, which are defined as any living organism that is either a single cell (unicellular), a cell cluster, or has no cells at all (acellular). Our Tax Dollars Paid for This - . protista / protozoa. microbiology 2314. protozoa can be human parasites. a parasite is