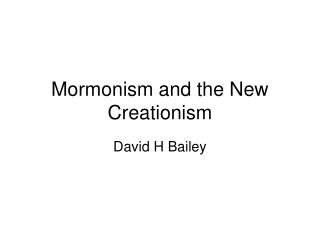 Mormonism and the New Creationism. David H Bailey. What is Creation Science?. Tenets of Creation Science. A sudden creation of the universe. Insufficiency of mutation and natural selection in bringing about development of all living kinds from a single organism. Mormonism 101 - . what the mormons want you to know … and some things they wish you didn’t. mormonism 101. betcha

The Truth About Mormonism - Mormon scriptures . the book of mormondoctrine and covenantsthe pearl of great pricethe king

MORMONISM - . beliefs. origins. joseph smith founder- came to him in visions. according to mormons he was a prophet.

MORMONISM AND ITS CONFLICT WITH THE BIBLE - . dr. jobe martin biblical discipleship ministries

Mormonism - . a sketch and evaluation of the lds church robert c. newman. what is mormonism?. many people view mormonism

Mormonism Introduction and Brief History - 2. mormons are generally well respected for their clean, honest living and

Mormonism - . comparative theology. outline. introduction views on god man and the universe salvation and the afterlife

Mormonism Facts - . commonly known as the church of jesus christ of latter-day saints claim that their church, as