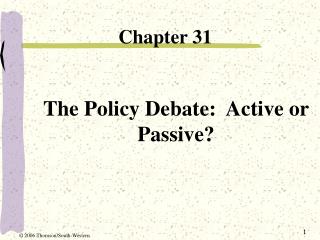 Active vs. passive - . by nour cherif. what is the difference between active and passive?. active voice. in an active

Active vs Passive Voice - . what is active voice?. when the subject of a sentence performs the action. frank built the

Active &amp; Passive Voice - . how can you tell the difference?. active voice. a sentence in which the subject of the

Active and Passive Verbs - . active. when the subject of the sentence is doing something the verb is active. e.g. the man

Active vs. Passive Voice - . why should writers think about their verbs?. “verbs are the most important of all your

Active/Passive Voice - . write the examples on a clean sheet of paper . what is the difference?. active: the ball hit

The Policy Debate: Active or Passive - . summary of activist position. active policy associates a high cost with the

POLICY DEBATE - . an introduction. by rich edwards baylor university. the structure of a debate. constructive speeches

Active vs. Passive Voice - . developed by jeniffer viscarra. why should writers think about their verbs?. “verbs are

Active vs . Passive Voice - . english 1 level 2. what is passive voice?. in sentences written in passive voice, the