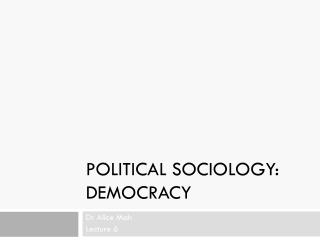 [ 1.2 ] Types of Government - . [ 1.2 ] types of government. learning objectives. classify governments according to three

Political Sociology - . “political sociology” is the study of the social organization of power . power is the ability

Political Science Test 3 - . fall 2007. chapter 9. question 01. definition : the programs of the administration of

Our Path to Democracy Kenneth E. Fernandez Assistant Professor Department of Political Science - . what is democracy? the

Democracy training - . because “it’s democratic” doesn’t mean it’s a good idea. why do we like democracy? –

Political Ideologies - . democracy. a type of gov’t which allows citizens to elect their leaders. other characteristics

Deliberative democracy - . • an attempt to reconnect a strong (demanding) conception of the moral ideal of democracy

Political economy Government growth - . today: how do people vote in a democracy? why did the government grow so much in

How Good a Democracy is the United States? - . some comparative evidence. economist intelligence unit democracy index.