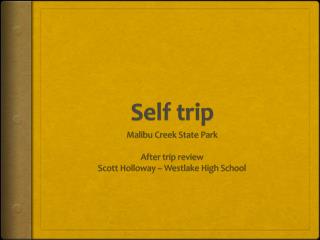 Self trip . Malibu Creek State Park After trip review Scott Holloway – Westlake High School. After your visit. Here are some of the observations I made while on my visit. I really enjoy this park and hope I opened your eyes to what a special place it is we live in. The First Steps In Your Self Help Trip - Be considered a far better you! suggestions for self

Planning for a Long Distance, Self-Contained Bicycle Trip - . mrs. cronk. why do it?. great exercise pace is better than

Bangalore Trip: Rent a Self-drive Car for your Family Holidays - One of the most wonderful ways to enjoy a trip to

Get A Self-Drive Car Hire Rwanda And Enjoy Your Trip - These cars can help you to reduce your travel time. their sensor

Self Esteem, Self Image, Self Love

Tectonic trip.  - . by: maria, michael, mckinley and cooper. convergent boundries. there are many types of boundaries