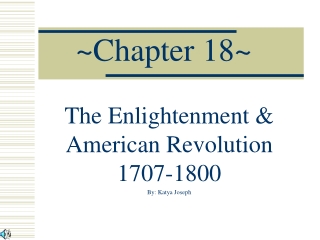 ~Chapter 18~. The Enlightenment & American Revolution 1707-1800 By: Katya Joseph. Philosophy in the Age of Reason. The Scientific Revolution of the 15 and 1600’s had transformed the way people in Europe looked at the world. It led to another revolution in thinking: the Enlightenment.