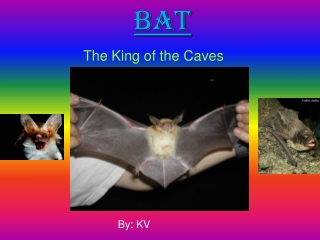 Bat. The King of the Caves. By: KV. Introduction. . Bats are mammals. It’s scientific name is chiropeta. It means wings on their hands. They are the only mammals that can fly. they are separated into two groups called megachiropeta and microchiro peta. What They Look Like. Bat - . the king of the caves. by: kv. introduction. . bats are mammals. it’s scientific name is chiropeta. it means

Bat - . flying mouse. main f a cts. bats are the only mammals that can fly . there are about 1 100 bat species wordwide

BumbleBee Bat - . by rebecca , brody and nathen. they are as light as a dime. rebecca. it’s nose looks like a pig’s

Bat Cave - . effects of temperature . battery unit. the heater is a 72-volt unit. it is primarily used to defog the

Indiana Bat - . by: anna w, carsyn , jaycee, and erin. the i ndiana bats has mouse like ears. they can be two inches long

Vampire Bat - A vampire bat has fangs which is how it sucks the blood of mammals and birds . it also looks like a pig and

BAT Presentation - This is a presentation of biometric awareness training's