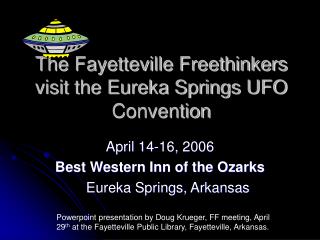 Fayetteville Freethinkers March 2011 - . problems with. easter. by doug krueger. back from the dead !?. according to the

Masonic Freethinkers - Down through the ages, the masonic fraternity has always sought the light of truth and knowledge.

The Eureka Stockade - . the birth of democracy in australia a 5pr 2011 story. the discovery of gold. august 1851 gold was

The Eureka Stockade - . by jessica. in 1851 people from all corners of the world came to ballarat in victoria, australia

The UMMO ufo-contact - . in 1950, inhabitants of the planet ummo (14 light years away) landed on earth they lived among

The Convention - . why the hs2 business case is flawed bruce weston hilary wharf stoneleigh, 19 february 2011. who are

The UMMO ufo-contact - . in 1950, inhabitants of the planet ummo (14 light years away) landed on earth they lived among

the eureka stockade/gold rush - . gold rush. the gold rush started in the 1650’s. bendigo is built over a gold mind.

Eureka! - . inventions and discoveries in america. if you had to pick one invention or discovery as your favorite,.