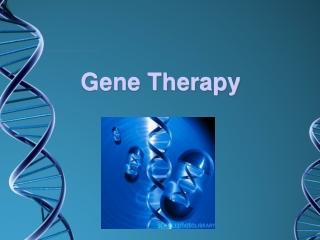 Gene Therapy. Genetics & Human Diseases. About 4,000 human diseases are thought to be inherited. Scientists are making good progress figuring out where genes are located on chromosomes. Genetic diseases are caused by mutations, or incorrect sequences, in the normal form of the gene. Gene Therapy - . kortlynn johnson. what is gene therapy?. a technique for correcting defective genes responsible for

GENE THERAPY - . in humans. cancer 69%. the food and drug administration (fda) has not yet approved any human gene

Gene Therapy - . meredith calhoun. what is gene therapy?. - gene therapy is a form of treatment that changes defective