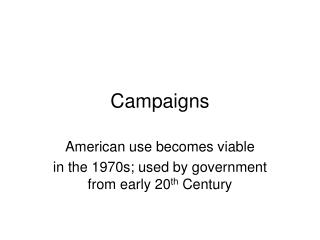 Campaigns. American use becomes viable in the 1970s; used by government from early 20 th Century. Campaigns. A campaign is an organized strategy using communication to affect change. Social advertising—the use of advertising media for a social purpose. PSAs The Awesome Power of Wow, Aha and Yippee - In this presentation we explore the awesome power of adding wow, aha, and

Benchmarking Top Facebook Advertising Campaigns in 2016 - Using the lessons of this swipe file, you will be able to apply

POLS 606 - . hierarchical models. intro . who are you? fields substantive interests? i am dave american politics

An Overview on the EatSmart Campaigns - . diet and disease. three ncds account for almost 60% of all registered death in

The Anti - Smoking Team - . the evils of s moking! . smoking – previous campaigns. campaigns against have been used