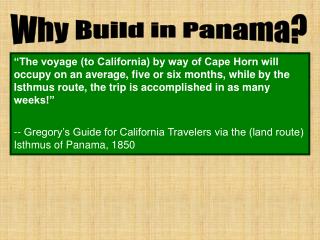 Why Build in Panama?. “The voyage (to California) by way of Cape Horn will occupy on an average, five or six months, while by the Isthmus route, the trip is accomplished in as many weeks!” -- Gregory’s Guide for California Travelers via the (land route) Isthmus of Panama, 1850. How to build a computer - Brought to you by sfsu’s acm presented by anthony fregoso what will this class do for you?

How to Build Your Own Static Analyzer For Fun and Profit Dr. Andy Chou Chief Scientist - Coverity inc. market research

Build Team Chemistry Using MBTI - . + =. questions we will answer today!. what is mbti and how does it help build

Build Your Kingdom Here - . come set your rule and reign in our hearts again increase in us we pray unveil why we’re