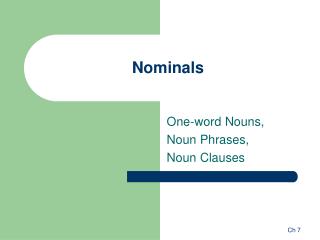 Nominals. One-word Nouns, Noun Phrases, Noun Clauses. Noun functions in a sentence I. Subject of the verb Two girls made the team. Object of the verb or verbal direct object While we were cooking dinner , John rang the doorbell , interrupting our evening together.