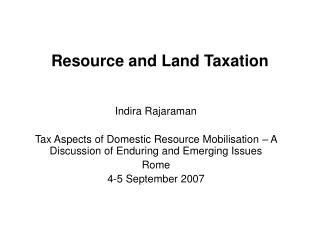 Land Value Taxation - F.a.q.’s. land value taxation. q: if lvt is so sensible, why don't we have it

Unit 4: Land and Resource Use - . chapter 11 agriculture, aquaculture, and the environment. agroecosystems. are

Land Tenure and Forest Resource Management in Asia - Purposes. observing that deforestation is often followed by

Shares and Taxation - . taxation implications of owning shares. income tax. any income that you make is able to be taxed.