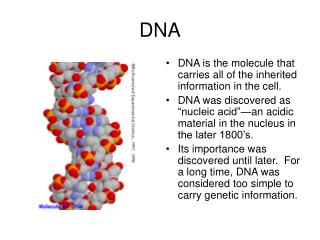 DNA. DNA is the molecule that carries all of the inherited information in the cell. DNA was discovered as “nucleic acid”—an acidic material in the nucleus in the later 1800’s. DNA and DNA Replication - . as you take notes, just write down the text that is in yellow. griffith’s experiment.

DNA - . section 12–1. this section tells about the experiments that helped scientists discover the relationship

DNA - . by c. kohn agricultural science waterford, wi. what is dna?. dna is deoxyribonucleic acid. it is kept in the

DNA - . try not to leave any behind – i dare you!. introduction. portions of the dna structure are as unique to each

DNA - . chapter 12. dna: the genetic material. the secret of life. think back…. gregor mendel and inheritance…

DNA - . deoxyribonucleic acid. the structure of dna (deoxyribose nucleic acid). a. dna is a macromolecules called

DNA - . the blueprint of life. dna. dna is located in the nucleus in the form of chromatin. it is made of units called