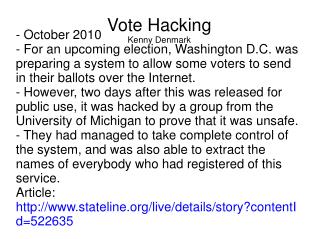 - October 2010 - For an upcoming election, Washington D.C. was preparing a system to allow some voters to send in their ballots over the Internet. - However, two days after this was released for public use, it was hacked by a group from the University of Michigan to prove that it was unsafe. Vote! Vote! Vote! - . “the vote is the most powerful instrument ever devised by man for breaking down injustice and

Kenny Chesney - . by toni bell. born in 1968 mother was a hair stylist father was an elementary school teacher he only

Vote Fraud, Vote Suppression - . ps 450. election fraud. what treats are there to the integrity of us elections? trying

VOTE? - So you think you can . vote?. a brief history of america’s voting rights. the early years. when the colonists