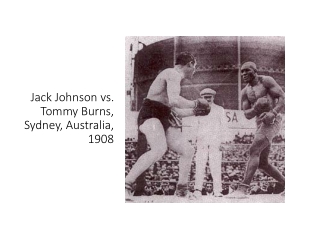 Jack Johnson - . sam cloutier april 2, 2012. facts. b orn and raised in oahu, hawaii b ecame a professional surfer at age

Sydney, Australia - . by: matthew lerch. weather conditions. monthly averages february is the warmest month and can get

Sydney Australia - . australian institute of commerce and language cricos provider no 02048a. our mission to be an

Sydney, Australia - . by: jason omann. sydney, australia was founded when the first fleet of eighteen ships arrived at

SYDNEY AUSTRALIA - . t he largest city in australia and home to the worlds most beautiful harbour. sydney has many

Sydney Australia - . by: criztal hernandez. why sydney, australia?. my dream vacation would have to be sydney. i have

Jack Johnson: The Galveston Giant - Jack johnson is a common face in many boxing clubs. his portrait hangs on the walls

On Tour with Jack Johnson - The presentation will take you on tour with the greatest singer of all time!. on tour with

On Tour With Jack Johnson - . this presentation will take you on tour with the greatest solo artist of all time!.

Sydney vs melbourne_infographic - Melbourne has been named the world’s most liveable city for the fourth year in a row,