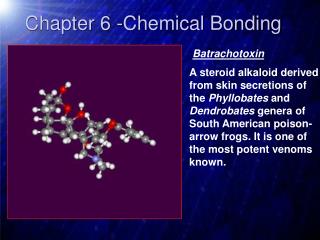 Chapter 6 -Chemical Bonding. Batrachotoxin. A steroid alkaloid derived from skin secretions of the Phyllobates and Dendrobates genera of South American poison-arrow frogs. It is one of the most potent venoms known. . Bonds. chapter 12 chemical bonding - . essentially everything we see around us, natural or man-made, compounds or elements, has