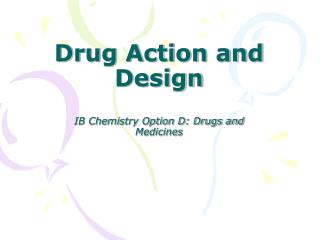 Drug Action and Design IB Chemistry Option D: Drugs and Medicines. Drug Action. The effectiveness of a drug is often related to the chemical structure and polarity of the substance . Factors that affect how a drug reacts include: Chirality Geometrical isomerism Ring strain Polarity. 2. Drug Free Workplace - . the facts about drugs. 1. 6% of the population over 12 years old has used drugs in the past 30

Good Manufacturing Practices in the manufacture of medicines - . the world health organization (who) gmp rules are the

Pharmacology and Medication Administration - . we’ll learn about drugs by classification. the broad group to which a

Drugs - . drugs. the actions of drugs scientists discovered certain substances that can help you feel better… why talk