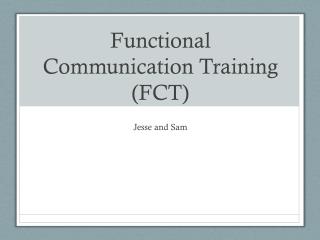 Functional Communication Training (FCT) - . functional communication training is based on the hypothesis that problem

FCT - : fct refers to functional testing that is used during the last phase of the production line. ict- fct-led is a

Functional Training - . overview. b egan in the world of physiotherapy used today to improve athletic performance one of

IMPLEMENTATION OF THE MILLENNIUM DEVELOPMENT GOALs AND THE ROLE OF STAKE HOLDERS IN FCT. - Implementation of the

Antecedent Based Interventions - . past literature. classified all antecedent-based behavior change strategies under