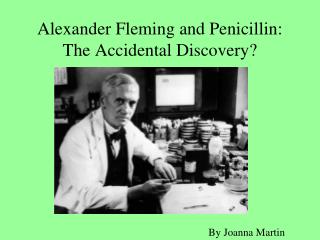 Alexander Fleming and Penicillin: The Accidental Discovery?. By Joanna Martin. A Clinical Case. A 48 year old policeman presents to Urgent Care with a small cut on his face after shaving The cut is slightly red and draining a small amount of pus Alexander Supertramp’s Belt - . in a group of 3 or fewer, you are going to recreate alex’s belt that ron fraz taught