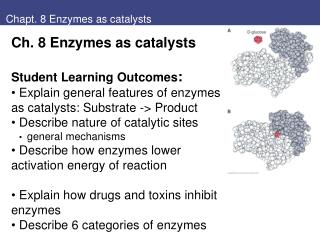 Enzymes as Biological Catalysts - . enzymes are proteins that increase the rate of reaction by lowering the energy of

Enzymes: Biological Catalysts - . catalysts. speed up the rate of the reaction. lowers the energy input required for a

Enzymes: Protein Catalysts - . increase rates of reaction, but not consumed. enable reactions to occur under mild

b. Explain how enzymes function as catalysts. - Sb1. students will analyze the nature of relationships between structures

Chapt. 8 – Job Evaluation - . primary goal of job evaluation: to develop the relative worth of all jobs to ensure fair

Common features for enzymes and inorganic catalysts: - Biochemistry - as science . structure and properties of enzymes.

Students as catalysts for regeneration - . moira munro university of glasgow. march 2010. key questions. what are

Chapter 8 (continued) Enzymes - . you should read the entire chapter. for the midterm, you will no t be tested on the

Catalysts - . s1 chemistry introduction to chemistry. where do you find catalysts?. they are chemicals which speed up

Catalysts - . catalyst-lowers activation energy of a chemical reaction and is neither a reactant or product. so what’s