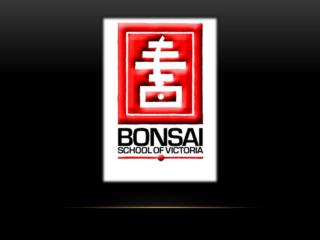 BONSAI - . history of bonsai. the correct pronuciation is bonsai (bone-sigh ), not to be confused with banzai on karate

BONSAI - . • if you shut your eyes and imagine what you can hold in your hands there would be thousands of

THE VICTORIA SCHOOL - . science introduction 5a-b grade. introduction. if you want children to keep their feet on the

Basic Information about Bonsai - Materials that are needed for maintenance of bonsai trees include the farmer’s knife,

Cascade-Style Bonsai - . claude sciberras. why do we use styles?. there are several reasons for identifying a bonsai by a

PROJECT REPORT By Dr. Ngo Chi Trung Hanoi University of Science and Technology - . since may 2010, the university name

Victoria M. - Victoria m. hi - i am nine years old and i am in mrs. sabri’s class. i really like dogs and wolves.