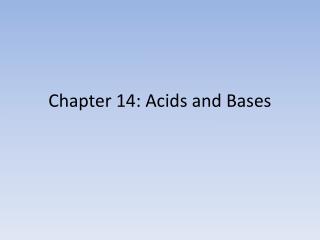 Chapter 14: Acids and Bases. Initial concepts of Acids and bases. First, acids were recognized as substances with a sour taste, but this was a dangerous way to identify. The Arrhenius concept identified acids and bases as a result of the ions substances release in solution. Bronsted - Lowry - . acids and bases. this is our second conceptual definition. acids – substances that donate protons

Chapter 17 Principles of Chemical Reactivity: The Chemistry of Acids and Bases - . acids &amp; bases: a review. in

Chapter 16 - . ionic equilibria: acids and bases. chapter goals. a review of strong electrolytes the autoionization of

SOLUTIONS, ACIDS, AND BASES - . what is a solution?. hummingbird food, hot tea, and coffee are solutions. . a solution is