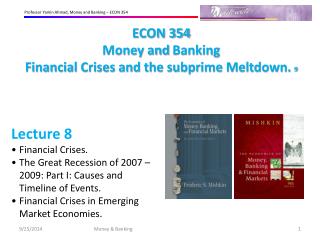 ECON 354 Money and Banking Financial Crises and the subprime Meltdown. 9 ECON 354 Money and Banking Financial Crises and the subprime Meltdown. 9

Money, Banking and the Financial Sector - . chapter 13. laugher curve . a central banker walks into a pizzeria to order

The Role of Financial Derivatives In The Origin And Spreading of the Subprime Crisis - . elisa parisi-capone. content.