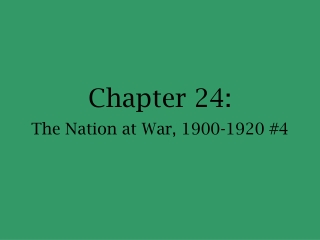 Chapter 24:. The Nation at War, 1900-1920 #4. Over Here. victory at the front depended on economic and emotional mobilization at home Wilson – moved quickly in 1917 and 1918 to organize war production and distribution also recognized the need to enlist American emotions