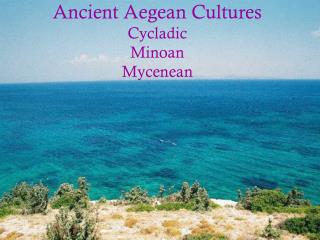 Art of the Ancient Aegean - . ap art history. where is the aegean exactly?. 3 major periods of aegean art:. cycladic:

Arts of Ancient Cultures - . ancient cultures. include tribes and peoples of prehistoric periods what we know about the

Minoan art - . 2700 to 1450 bc bronze age civilization the island of crete. minoan civilization. the beginning of its

Ancient Civilizations &amp; Acquainted Cultures - . civilizations a round the world during the roman era china,