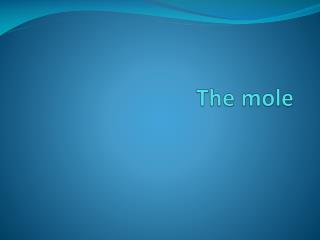 The MOLE - . the term “mole” is used to count numbers of atoms and molecules a “mole” represents a number 6.02 x

The MOLE - . the center of the chemical universe. the mole. does not refer to a small woodland animal who lives in

The Mole! - Also known as… the single most terrifying, horrific, scariest chemistry concept of the modern world. the

The Mole - . how you measure how much?. you can measure mass, or volume, or you can count pieces. we measure mass in

The Mole - . not the type of mole we are talking about. measuring matter . you often measure the amount of something by

The Mole - Conversions involving molar mass and avogadro’s number. the mole. the mole. a unit of measurement for