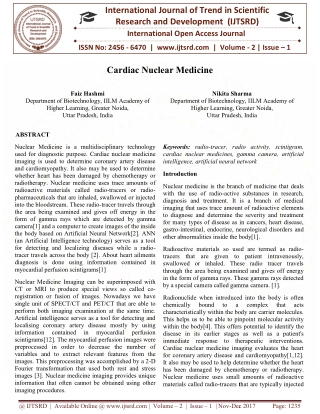 Nuclear Medicine is a multidisciplinary technology used for diagnostic purpose. Cardiac nuclear medicine imaging is used to determine coronary artery disease and cardiomyopathy. It also may be used to determine whether the heart has been damaged by chemotherapy or radiotherapy. Nuclear medicine uses trace amounts of radioactive materials called radio tracers or radio pharmaceuticals that are inhaled, swallowed or injected into the bloodstream. These radio tracer travels through the area being examined and gives off energy in the form of gamma rays which are detected by gamma camera 1 and a computer to create images of the inside the body based on Artificial Neural Network 2 . ANN an Artificial Intelligence technology serves as a tool for detecting and localizing diseases while a radio tracer travels across the body 2 . About heart ailments diagnosis is done using information contained in myocardial perfusion scintigrams 1 . Nuclear Medicine Imaging can be superimposed with CT or MRI to produce special views so called co registration or fusion of images. Nowadays we have the single unit of SPECT CT and PET CT that are able to perform both imaging examination at the same time. Artificial intelligence serves as a tool for detecting and localizing coronary artery disease mostly by using information contained in myocardial perfusion scintigrams 12 . The myocardial perfusion images were preprocessed in order to decrease the number of variables and to extract relevant features from the images. This preprocessing was accomplished by a 2 D Fourier transformation that used both rest and stress images 3 . Nuclear medicine imaging provides unique information that often cannot be obtained using other imaging procedures. Faiz Hashmi | Nikita Sharma "Cardiac Nuclear Medicine" Published in International Journal of Trend in Scientific Research and Development (ijtsrd), ISSN: 2456-6470, Volume-2 | Issue-1 , December 2017, URL: https://www.ijtsrd.com/papers/ijtsrd8212.pdf Paper URL: http://www.ijtsrd.com/medicine/radiology/8212/cardiac-nuclear-medicine/faiz-hashmi The Role of Nuclear Medicine in Infection/inflammation - . hussein s. kartamihardja department of nuclear medicine and