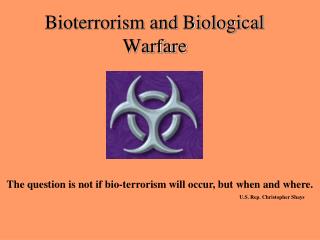 Bioterrorism and Biological Warfare. The question is not if bio-terrorism will occur, but when and where. U.S. Rep. Christopher Shays. Definition of Bio-terrorism. Emerging Infectious Diseases and Bioterrorism - . dr peter washer southern association for the history of medicine and

Fighting with spherical coordinates Simon Strange Pipeworks - . the point of all this:. some concepts we’ve already

Bioterrorism Awareness: Protection of Human and Animal Health - . general public. why are we here?. september 11, 2001

Amazonian Warfare - . laura zanotti may 1, 2008. amazon as a warscape. is there any connection between current

GIS in a context of Bioterrorism - . maria styblińska university of silesia institute of informatics. deaths in angola.

Technology and Warfare in WWI - . changes in tactics. in previous wars soldiers had fought open fields with cavalry

Responding to the Threat of Bioterrorism: A Status Report on Vaccine Research in the United States - . dixie e. snider,