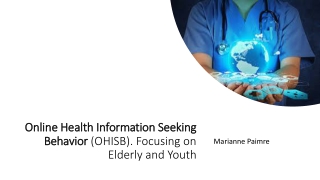 Online Health Information Seeking Behavior (OHISB). Focusing on Elderly and Youth. Marianne Paimre. Task 1. When did you last search for health related information? What kind of information channel/medium/source did you use? Information Seeking Behavior - . lis 510. introduction. every day we are deluged by data it is received through our five

Suicidal Behavior Among LGBT Youth - Data based upon aas fact sheet and the sprc lgbt youth. suicidal behavior among lgbt

The Consequences of Seniors Seeking Health Information Using the Internet and Other Sources - . stephanie medlock, msc,

Voluntary Sector Youth Organisations - . what is youth work?. focusing on young people – on their informal learning and

Home Health Care Online - Affordable home health care online. it takes a lot of compassion to care for the elderly,

Seeking Information – the Tools - . finding and recording information. where does it come from?. click on each of the