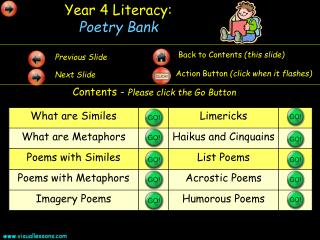 Year 4 Literacy: Poetry Bank. Back to Contents (this slide). Previous Slide. Action Button (click when it flashes). Next Slide. Contents - Please click the Go Button. What are Similes?. As clean as a whistle. As quick as lightning. As dead as a dodo. As bright as a button. YEAR 5 POETRY UNIT - . week one. during today’s lesson . we will: review our previous learning – by showing we

Presentation to the World Bank - . annamaria lusardi financial literacy center and the george washington school of

YEAR 11 POETRY EXAM DRAFTING GUIDE - . 1. offer a general introductory statement that sets up the concepts of the task.

Poetry - . poetry is not a rose, but the scent of the rose . . . not the sea, but the sound of the sea. eleanor farjeon

Year 9 Poetry &amp; IdentiTY - . what does identity mean? . think, pair, share activity: - you have been asked to

Understanding Poetry - . norwood public schools. what is poetry?. in poetry the sound and meaning of words are combined