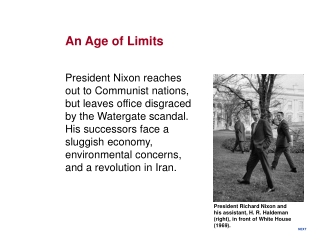 An Age of Limits. President Nixon reaches out to Communist nations, but leaves office disgraced by the Watergate scandal. His successors face a sluggish economy, environmental concerns, and a revolution in Iran. President Richard Nixon and his assistant, H. R. Haldeman (right), in front of White House (1969). - An age of limits.