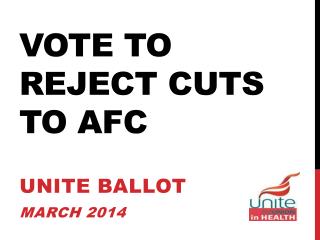 Vote to REJECT Cuts to AFC Vote to REJECT Cuts to AFC. Unite Ballot March 2014. Decision facing m embers. The Welsh Government are proposing cuts to the Agenda for Change terms and conditions. Change will take effect from 1 st May 2014 if accepted.

Vote to REJECT Cuts to AFC

The final Super Tuesday - California and five other states vote in primaries, as hillary clinton wraps up the democratic

Greece votes No - Greeks voted overwhelmingly to reject terms of a bailout, risking financial ruin in a show of defiance

Welcome To: - . tenderfoot requirement #12 a. demonstrate how to care for someone who is choking. b. show first aid for

Vote 25: department of police - . briefing to the select committee on security and constitutional development 20 april