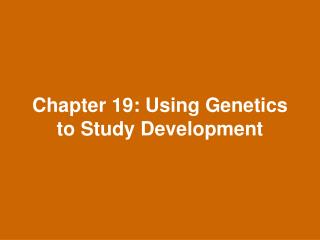 Chapter 9 - Introduction to Genetics - . genetics – the branch of biology that studies heredity – how traits are

Chapter 11 Introduction to Genetics - . gregor mendel and his work (section 11-1) peas and genetics genes and dominance

Genetics and Development - . embryology &amp; genetics. how did the work of boveri and stevens support the

Introduction To Genetics- Chapter 11 - . i. the work of gregor mendel. a. gregor mendel was born in 1822 and after