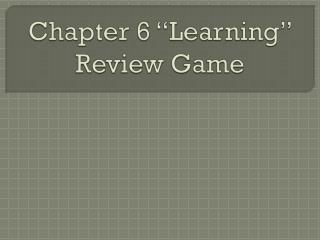 Chapter 6 Learning - . learning. learning is defined as any relatively permanent change in behavior that is based upon

CIS 350 – I Game Programming Instructor: Rolf Lakaemper - . review and questions. about. the following slides give a

AP PSYCHOLOGY Review for the AP Exam - . memory chapter 9. memory. memory *persistence of learning over time via the

SOL Review Game - . who were the first people who lived in virginia?. a. scotch, irish, and germans b. english settlers

Oligopoly - 13b. chapter. oligopoly. after studying this chapter you will be able to. define and identify oligopoly

News Review Game - . question 1. name one concern about the recent rise in citizen journalists. question 1. anyone can