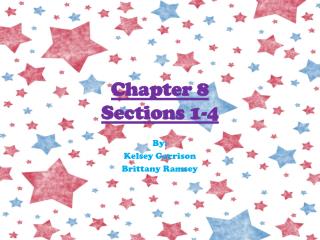 Chapter 8 Sections 1-4. By: Kelsey Garrison Brittany Ramsey. S eismology. The study of earthquakes. The scientists who study the earthquakes are called seismologists. Fault. Chapter 4 Sections 1 &amp; 2 - . life in the colonies. objectives: describe the triangular trade and how it affected

Chapter 14 Proteins Sections: 1-4 - . by: kelsi myer and rachel dailey. section 1 what are the many functions of

Chapter 14, Sections 4. - Chapter 14, sections 4. how did the resolution of ww1 affect europe. the entry of the united