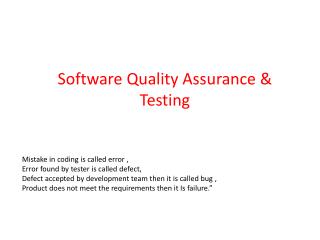 Software Quality Assurance & Testing. M istake in coding is called error , E rror found by tester is called defect, D efect accepted by development team then it is called bug , Product does not meet the requirements then it Is failure.”. Importance of Test. QUALITY ASSURANCE AND VALIDATION FOR BIOMANUFACTURING - . welcome to the course. chapters. the fundamentals of quality

SQA’s Approach to Quality Assurance of Assessment - . matthew mccullagh quality manager welcome 欢迎. why are we