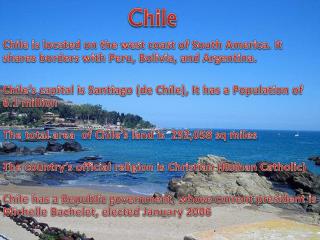 Chile. Chile is located on the west coast of South America. It shares borders with Peru, Bolivia, and Argentina. Chile’s capital is Santiago (de Chile), It has a Population of 6.1 million The total area of Chile’s land is 292,058 sq miles