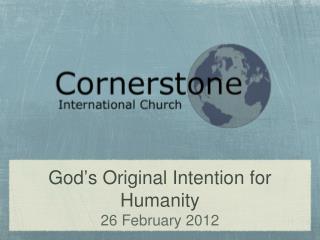 Act One: God Establishes His Kingdom – Creation - . introductory remarks…. genesis 1 is not first concerned about how

Christology 9 The Future Ministry of Christ - . series: critical doctrine the rapture of the church. christology. the

When should the primary analysis of a trial not be intention to treat? Group 6 - . lakshmi bhaskara , allison dostal ,

Evolution of Humanity - . how do we determine “progress” and “modernity”?. remember darwin?. evolution – the

God’s Will - . the surpassing riches of his grace. ephesians 1.5: he predestined us to adoption as sons through jesus