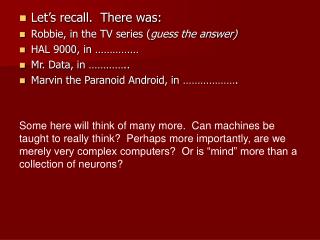 Let the Sunshine In - . the evidence, or lack thereof, regarding vitamin d. what is vitamin d? . fat-soluble vitamin

Why was there a Terror in the USSR in the 1930s

Answer the following ?s in your ISN - . what do you notice about the cells that we looked at yesterday?? are there any

In the beginning, there was a Latin verb; and the verb was ēdere - . produce, emit, yield, extract put forth, send

In the beginning was the letter - . s low expensive much duplication best solution given available technology. oldenburg

“The end was in the beginning” - . invisible man chapter 25. independent reading: finish book by april 9 annotated

There was a duck in the chicken house!

'In the beginning was the Word...' - . language and tok. tyranny of language. one of the most powerful aspects of